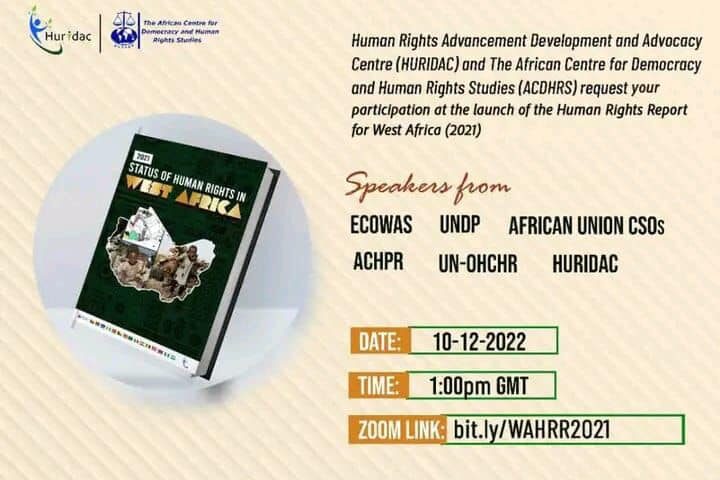 According to the Executive Director of HURIDAC, Mr. Ayodele Ameen, “This report focuses on the human rights legal framework in West Africa in 2021, which has seen a decline in human rights observance in most West African countries as a result of lack or absence of political will to implement ratified international and regional treaties like the United Nations, African Union and ECOWAS treaties”. Hannah Forster, the Executive Director of ACDHRS also stated that “in 2021, human rights compliance is still a challenge. States struggle in complying to Concluding observation of UN treaties committees recommendations of the African Commission of Human and People’s Rights and various decisions of the ECOWAS court of Justice and the African Court’.

According to HURIDAC and ACDHRS, the success of a human rights-friendly environment is determined by a variety of international, continental, regional, and national organizations. On the international level, these institutions include the United Nations and the International Criminal Court (ICC); on the continental level, the African Union including the African Commission on Human and Peoples’ Rights, African Commission on Rights and Welfare of the Child and The African Court on Human and Peoples’ Rights (the Court); on the regional level, the ECOWAS Commission and ECOWAS Court of Justice; and on the national level, the National Human Rights Commission and the Office of the Ombudsman.
HURIDAC/ACDHRS 2021 West African Human Rights report captures various segments of human rights index based on available data obtained from relevant sources and publications and presents the statistics in a data form for proper comprehension of the sub region scorecard on human rights observance and compliance.
The organizations frowned at the declining human rights observance space in West Africa compared to 2020 which has led to an increase in human rights abuses, domestic and gender-based violence abuses, insecurity, unlawful arrest, torture and killings, etc.
The report shows that in West Africa in 2021, 9823 people were unlawfully killed, 6414 were arbitrarily arrested, 19,973 people were tortured or injured and 48,644 experienced gender based violence. On the insecurity score, Nigeria, Niger and Benin Republic are the most unsafe place for respect of human rights. The Gambia is the opposite. The report also shows that, compared to Guinea and Liberia who have no representation, Nigeria has the highest proportion of its nationals represented in international human rights bodies. The report highlights the human rights ranking table for compliance index, with Benin Republic leading, followed by Mali receiving the highest scores and Cape Verde receiving the lowest.
Some of the key indices of the 2021 West Africa report include among others human right compliance, democracy and democratic rights, people with disability and older persons, corruption, elections and military interventions, women and child rights, compliance of African countries to their reporting obligations, protection of vulnerable groups etc.

As part of its recommendations among several others, HURIDAC called on the continental and regional commissions to put into perspective, the attitude of these countries towards conventions, study the root causes and to draw an action plan to amend it.
HURIDAC/ACDHRS canvassed that the African member states; review existing laws to capture the entirety of environmental human rights, review sub-provisions that weaken the enforcement of existing laws and treaties, strengthen the institutions and agencies responsible for the enforcement of such laws/treaties and set up a reward system for countries that meet the set environmental target.
Thank you.